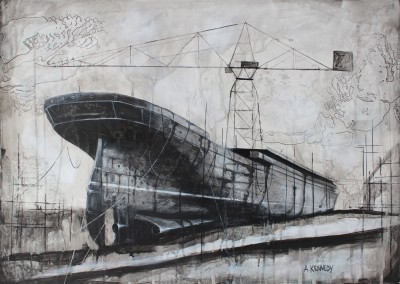 Adam Kennedy was born in 1988. He studied at Edinburgh College of Art in 2007 and took the opportunity to study oil and Japanese painting at Kyoto Seika University, Japan. As a result Adam has learnt a variety of painting mediums.

Adam graduated from Edinburgh College of Art in 2009 and returned to his native Glasgow before going on to win the Aspect Prize in 2010/11.

His current work focusses on late 19th century architecture. It also involves site specific installation and sculpture influenced by the history of airline travel to drawings and paintings reflective of his childhood fixation with transport and growing up next to the River Clyde in Glasgow.

His techique combines oil, acrylic and water colour on the same surface. The different mediums react to form textures suggestive of aged metal and tones not dissimilar to that of the blue greys found in a typical Glasgow sky and the aging sandstone of Glasgow architecture. The paintings are not necessarily a visually accurate representation of any specific structure but rather a slightly abstract, collage of mediums. This sucessfully creates the atmosphere of being in the presence of these great constructions and the nostalgia one might feel when coming across aged prints and monochrome photographs of these aging objects.

Adam Kennedy art works are meant to look precious: corroding images protected only by the safety of their frames. It is an attempt to reflect these subjects in an age where aviation has taken over a once highly used form of travel which has now been left to rust and the lost artistry and soul of old Glasgow architecture.