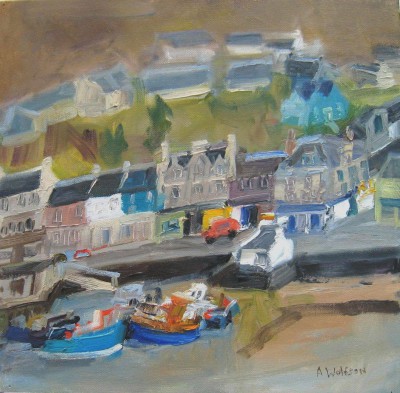 Alma Wolfson was born in 1942. Between 1960 and 1964 Alma studied under Robert Stewart at Glasgow School of Art.

Alma Wolfson is a member and Past President of GSWA; the SAAC; and Southern Art Club.

Up until the late eighties Alma's paintings were completed in gouache. After joining the Glasgow's Southern Art Club she was encouraged to switch to oils and hasn't looked back.

Alma loves painting 'en plein air' in the Scottish country and seaside. She produces compelling paintings in both oil and watercolours. Wolfson's painterly approach is suited and used to great effect when painting Landscape or Seascapes. But she is equally at home producing beautiful Still Life paintings.

However it is the constantly changing Scottish weather patterns which are a constant source of inspiration and challenge to Wolfson. These paintings communicate real atmosphere - capturing the time and place often in dramatic fashion. Alma says: 'The best thing in the world is to be tucked away, out of the wind, in the Scottish countryside or by the sea, painting like fury before the next change in the weather.' For the last 30 years she spent time on the tiny island of Easdale on Scotland's west coast. Much of her landscape work has been inspired by this remote part of Argyll where Alma is a familiar sight on the island - often seen as a tiny figure sitting wrapped up against the elements in front of a large canvas

Alma claims not to be one of the fastest artists and that it takes her all day to warm-up to be flexible enough to paint. This may account for the number of paintings that have a late afternoon light. But Wolfson's produces paintings that are full of light and fresh air - coupled with clouds and shadows. She also brings a special eye for shape, form, colour and texture. The results are wonderfully loose landscapes of the Scottish countryside in all weathers and seasons.

Alma is a Scottish colourist in the tradition of Cadell, Fergusson, Hunter and Peploe. She sees Landscape in certain colours and these appear regularly in her contemporary art. Indian Red is her chosen paint for bracken and Indigo Blue for the pines of Perthshire. Until 20 years ago, Wolfson painted entirely in gouache but after becoming a member of Glasgow's noted Southern Art Club, she was encouraged by her peers to take up oils.