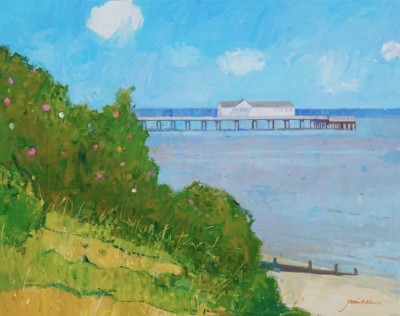 Charles Jamieson (b.1952) is a Scottish Artist known for his distinctive and intelligent use of colour, coupled with light and shade.

Charles Jamieson studied at the Glasgow School of Art from 1969-74, followed by further studies at the Texas Christian University at Fort Worth, Texas where he gained his MFA (Master of Fine Arts).

He is recipient of numerous art awards such as the William Bowie Award in 1999, and the Richmond Hill Gallery Award in 2004 and 2007. He was nominated by The Herald as ‘one of 50 Scottish Artists to invest in’, as well as being a past Chairman of the Aspect Prize and also a past President of the Paisley Art Institute.

Charles Jamieson’s paintings are diverse in subject matter and he is equally comfortable painting still life, landscape, marine, or architectural subjects. He travels widely, capturing the essence of his locations in his pared back landscapes. His work is being increasingly sought after with his paintings being held in collections across the globe, including the Clydebank Museum, Ernst and Young, Prudential, Caledonian Breweries, and the private collections of Harry Enfield and John Le Carre, and the Kuwaiti Royal Family.

In addition to Red Rag Art Gallery Charles Jamieson has exhibited at a number of other English and Scottish art. Each painting at Red Rag is sourced from the Charles Jamieson artist studio and like all Red Rag Contemporary art it can be shipped worldwide.