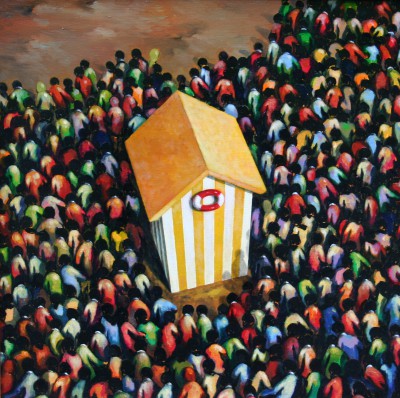 David Schofield was born in Wrexham in 1972. As a young artist he studied contemporary art at the Duncan of Jordanstone College of Art graduating with a BA (Hons) in Illustration and Printmaking. Following that Schofield lectured in the College of Art Design school from 1994 to 1998. He also spent time working as a freelance illustrator

Since 1997 David Schofield has exhibited his contemporary paintings extensively in Scotland and more recently throughout England and Internationally.His paintings typically explore the ideas of stability and safety and the idealised notions of the remote and rural.

Talking about his art David says: 'As an artist I play with everyday locations, the omnipresent Scottish tenement building transformed into grand coliseums , the commuter masses into a sea of figures, narratives formed from a mass of people, the archetypal lushness of a meadow and the empty forest. However ,within these comfortable stages the foreign or 'unreal' are often placed; candy striped lighthouses planted far from the sea, biplanes breaking free from their moorings, all which add to a specific sense of surrealism and foreboding danger.

The overarching themes in the paintings are the ideas of stability and safety and the idealised notions of the remote and rural. Narratives born of observations of people, places and situations all contribute to the paintings'.

David Schofield is a regular exhibitor at the Royal Scottish Academy and the Royal Glasgow Institute of Fine Arts. In 2003 he won The James Torrance Memorial Award, Royal Glasgow Institute of Fine Arts and in 2005 he exhibited at the RGI Annual Art exhibition where he won the coveted David Cargill Art Award for Artists under 35 years of age.His latest success has been in October 2007, where he won the City Of Glasgow Award whilst exhibiting at the RGI. In 2017 he was given a Merit award in the book illustration section at the iJungle international illustration competition.

Schofield's innovative and imaginative work features in many private modern art collections in the UK, USA and France.