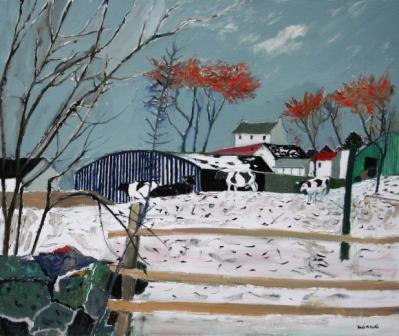 Scottish Contemporary Artist David Martin was born in 1922 and died 2018. He studied modern art at Glasgow School of Art from 1940-42. After a period of time in the RAF David Martin went to Jordanhill- a Scottish teachers training college.

David Martin is particularly known for his contemporary paintings of Scottish landscapes and still life work. He paints in watercolour but mostly in oils.

In his landscape paintings David Martin extracts rhythmic lines and lactated shapes from what is seen. These are sometimes echoed in other parts of the painting. The interpretation is not, therefore, totally visual - the painting becomes an equivalent to what is seen and takes on its own reality as it progresses. It is a process of development tied up with the act of painting - an exploration of shapes and movement.

David Martin paintings are held in many public and private art collections including The Scottish Arts Council, the City of Edinburgh Art Collection, Robert Fleming and Company and the Dick Institute, Kilmarnock