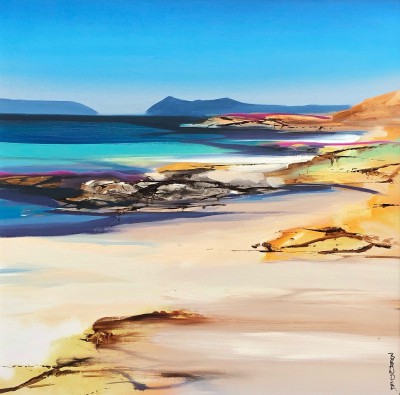 Garry Brander began his studies in 2005 obtaining his HND in graphic design in 2007, winning several awards including the Trade House of Scotland ‘Best 2D Painting’. He began exhibiting his artwork in and around the west coast of Scotland and shortly after made the decision to attend the Glasgow School of Art. Graduating in 2011 with a BA Honours in Fine Art, he enjoyed a sell-out degree show.

Garry spends much of his time painting the highlands and islands of Scotland, particularly the island of Tiree, where his family has lived and worked the old watermill and surrounding crofts for over 500 years. His love of the West Coast has inspired his paintings and living on the islands, learning about remoteness, isolation and the beauty of the beaches and landscapes, has forged the artist he has become. His upbeat and vibrant modern palette raises the viewer’s level of emotional engagement with his paintings and reminds them that Scotland is one of the most beautiful places on earth.

Garry Brander’s contemporary artwork is in private collections all over the world and has been exhibited in Art Fairs from New York to London and Amsterdam. He also exhibits with many of Scotland’s best-known galleries and has had many successful solo exhibitions.