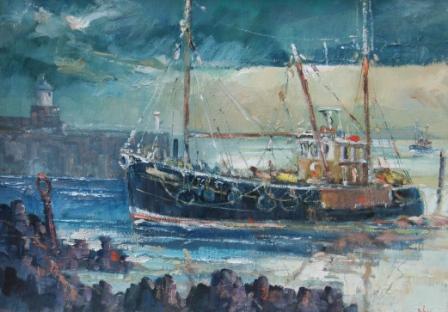 James Watt was born in Glasgow and is a graduate of Glasgow School of Art. He was elected a Member of Society of Scottish Artists in 1965. Watt was a founding member of the Glasgow Group of Artists. In 1997 he received The Royal Bank of Scotland Award at the Glasgow Institute.

James Watt is an immensely successful Scottish contemporary artist. He is among Scotland's most prestigious and prolific artists with a portfolio of paintings that spans over half a century.He was elected to RGI in 2002 and his paintings can be found in numerous public art collections as well as the private art collections of Her Majesty the Queen, His Royal Highness Prince Philip and The Princess Royal.

At his Scottish home are shelves crammed full of books on the sea and seafaring testify to his enduring involvement with all things maritime. Watt says: "hope if I ever get stranded on a desert island I have my books on seamanship or boatbuilding with me!".

James Watt grew up and lived in Greenock for most of his life - a place which in the 1930s had busy harbours and shipyards. It was a way of life that James Watt was born into and an environment that involved every adult male and dominated every conversation. From his earliest years James engaged with all aspects of the shipping business. The arrival of a new, enthusiastic and charismatic art teacher - an ex-miner - in his fourth year at secondary school ignited James Watt interest in painting.

As a result of having 'a good teacher at the right time'James subsequently enrolled at the Glasgow School of Art - something of a 'pioneer' since no-one from his family had ever been to University or college. After teacher training Watt spent two years in the army which he describes as 'thinking time'. But Greenock harbours were always on his mind and 1957 he identified the puffers as 'the perfect motif' to capture his marine interests in his paintings - small enough to get close up to. James got to know the personalities of the sailormen and fishermen, sailed with them, fishing everything from sprats to whales.

James Watt always paints outside and from life. This Watt believes gives his contemporary paintings spontaneity and enables him to catch the nuances of Scottish light. He has been described as a Modern Impressionist, the fluid brush stokes and love of colour are hallmarks of his paintings.

James Watt has travelled widely producing paintings on his many visits. However his principal inspiration has always come from Scotland. Watt remains a marine painter because that is what he knows, his gut influence and his way of life.