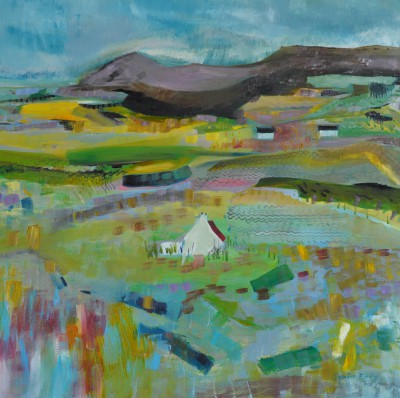 Katherine Swinfen Eady was born in 1966. She trained at Edinburgh College of Art under William Baillie, John Houston, George Donald and David Michie gaining a BA[Hons] in Drawing and Painting in 1989. The training at Edinburgh was centred on the traditional craft of drawing and strong use of colour which is so evident within Katherine’s work and she feels very privileged to have benefited from such a formal training.

The Scottish influence remains very strong in Katherine's art work. Scottish artists such as Sir Robin Philipson and Dame Elizabeth Blackadder have had a major influence on Katherine's paintings. They demonstrated that to be successful you do not have to compromise your talent as a true painter, a belief that Katherine holds very dear. She says: "At Edinburgh I had the privilege to be tutored by successful artists who inspired me to continue in the tradition of Scottish oil painting."

Katherine lives on Salisbury Plain and enjoys the vast areas of uninhabited landscape, the shifting light and impressive skies which she finds a constant source of inspiration. Much in demand now after eight successful Solo shows, she can regularly be found at all the major Art Fairs and exhibits landscapes from as far afield as the Isle of Harris and Palestine. Her focussed and detailed still-lives are also much sort-after, after winning her the coveted William and Mary Armour prize from the Paisley art Institute in 2007.