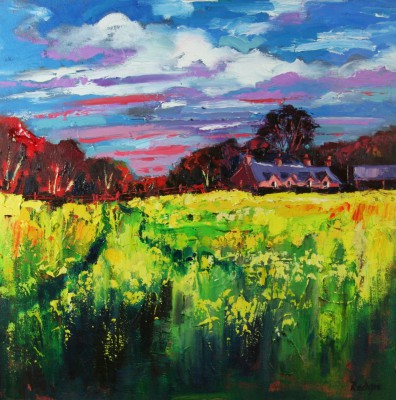 Lynn Rodgie studied at Gray's School of Art in Aberdeen having grown up in a very artistic environment. Her father, also an artist, has inspired and encouraged her greatly throughout her life.

After obtaining a BA Hons degree in graphic design Lynn Rodgie worked as a Graphic Designer in Glasgow for a number of years before deciding to paint full time. Lynn Rodgie's design background shows in her paintings. Many of her paintings are stylised rather than fully representational.

Rodgie is constantly inspired by her environment; the Scottish countryside around her gives endless ideas for paintings. As she says; 'The soft rolling hills of the borders is perhaps not as spectacular as the rugged north or as picturesque as the Lake District, but it has a gentle pull that grows on you over time.The geometric shapes and colours of the ploughed fields, rows of hay bales in a golden field are visions that will get me itching to pick up a paintbrush'.

Artists who have influenced Lynn Rodgie include James Fullerton, John Bellany and Lin Pattulo to name but a few.

Lynn Rodgie works mainly from photographs. 'Photographs enable me to capture the pattern, shapes and composition of a particular painting and I can enhance the colours and vigour of the painting when I get home'. She works mainly in acrylics as she enjoys the versatility of the medium.

In addition to Red Rag Art Gallery Lynn Rodgie has exhibited at other leading British Art Galleries. Each painting at Red Rag is sourced from the Lynn Rodgie artist studio and like all Red Rag Scottish art and contemporary art it can be shipped worldwide.