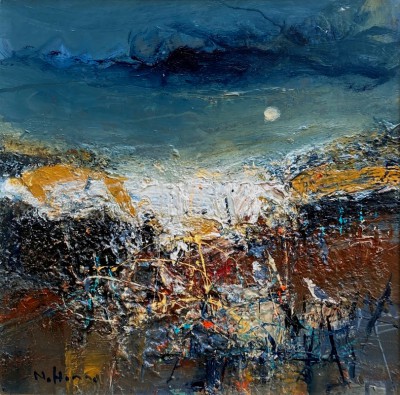 Nael Hanna was born in 1959 in Neneveh, Northern Iraq and is of mixed culture - Greek and Christian Orthodox. From an early age Nael showed interest in art spending much of his childhood studying and drawing animals, birds and people. At the age of nineteen, Hanna entered college before being drafted into the Army to serve during the Iraq-Iran War. Whilst in military service, Nael continued to paint and was awarded a scholarship by the Ministry of Education, Baghdad. As a result he studied art in Britain.

Starting in 1983, Nael undertook art and language courses in Southampton before being awarded a scholarship to study Fine Art at Duncan of Jordanstone College of Art in Dundee. In 1987, he won a further scholarship to study at Hospitalfield Summer School, Arbroath, and it was during this time that he developed his great passion for the East coast of Scotland particularly the Angus and Kincardinshire coastline, with its dramatic scenery and ever changing weather.

Upon graduating with First Class Honours in 1989, Nael travelled to Florence to study, after being awarded The Royal Scottish Academy John Kinross Scholarship. He later returned to the rural Angus countryside where he made his home. After qualifying MPhil in Art at Dundee Hanna became a lecturer in the Fine Art Department of Duncan of Jordanstone College of Art and then became Artist in Residence at Anton House day centre in Broughty Ferry - a charity providing care services to adults with physical disabilities.

Today, Nael devotes his time fully to painting and continues to be inspired by his deep love of nature, and his fascination with the elements so dramatically displayed within the Scottish landscape and its coastlines. His paintings often transcend the immediate depiction of the landscape and embrace the human relationship with the land. From the people living in these areas- the fisherfolk and their relationship with the sea, and the farmers working the land, Nael Hanna is driven to capture the rhythms, atmosphere and textures so unique to this part of the world.

Talking about his paintings Nael says: “I am inspired by water, sound and nature, being fascinated by the changing colours and shapes reflected in the sea, land and sky. I enjoy looking for the rhythms created in nature and hope to capture the force of the natural elements which dictate so much to the world that we live in. I spend a great deal of time observing the coastal landscape near my Angus home, and however much at times I feel that I should escape from this recurring subject, I am always willingly drawn back by its sheer beauty and magnetism”.

Nael Hanna is the recipient of many art prizes and awards. Over the years his paintings have been exhibited regularly at the RGI, RSA, SSA and SAAC and he has had numerous solo shows. His paintings are instantly recognisable and distinctive with rich texture and a unique colour palate. He paints with vigour and there is an immediacy in his paintings which is extremely stimulating to the viewer, whether it is a Scottish coastal scene or a vibrant still life.

In addition to Red Rag art gallery Nael Hanna art work has been exhibited at other leading British Art Galleries. Each painting at Red Rag is sourced from the Nael Hanna artist studio and like all Red Rag Scottish art and Contemporary art it can be shipped worldwide.