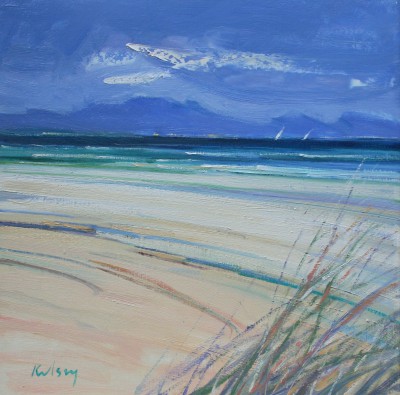 After graduating, like many Scottish artists, Robert Kelsey embarked on a career in Art Education. As an art teacher in a sympathetic school environment Kelsey was encouraged to concentrate on his own art projects alongside classroom work. By the time Bob was appointed Principal Teacher in the '80s he had established his own art studio and was able to continue to painting there.

In 1995 Robert Kelsey decided to leave art teaching for a full-time career as an artist. Success soon followed and Kelsey has enjoyed many successful art exhibitions in Britain, Europe and the United States. Robert's contemporary paintings can also be found in several corporate art collections. In 1998 he was awarded a diploma from Paisley Art Institute.

Despite being an enthusiastic traveller, Robert Kelsey has always loved returning to his Scottish roots and the inspiration found in the beauty of the Scottish coastline. He has established a creative reputation from his faithful depictions of the coastal landscapes of Western Scotland and its adjacent islands. Kelsey's' distinctive oils on canvas paintings convey the vast flat beaches, sparkling emerald water and majestic skies in a glowing array of blues, golds and greens.

Speaking about his paintings Robert Kelsey says: 'Much of my inspiration comes from the land and seascapes to be found on the West coast of Scotland, near Arisaig, and in particular, the coasts around the islands of the Inner and Outer Hebrides. My Grandparents were school teachers on Barra at the turn of the last century and my father was born on the Island in 1906. When I visited the island myself some years ago I enjoyed the experience of arriving in a tiny plane, and landing on the cockle strand airstrip with salt spray splashing the windows. Seconds later, walking on the sand, I was overcome by the beauty of my surroundings. A vast flat beach, sparkling emerald water, and a huge sky'.

Robert Kelsey is now firmly recognised as one of Scotland's leading contemporary artists. He is known for his lively and fluent style of painting and his undoubted artistic skill in capturing light and colour, to which he brings an unparalleled accuracy. True to the captivating qualities and philosophy of the Scottish Colourists, Robert Kelsey paints with vigour and feeling to interpret a sense of place through the power of light and colour.Talking about his paintings he says: 'Light is generally the most important quality. For me, the main interest and challenge of painting lies in capturing the particular translucency and clarity of light in different parts of the world'

Over the past decade or so, Robert has established an enviable following and reputation for his sensitive and atmospheric oil paintings, and especially for his beach subjects. Kelsey often focuses on the wide, lonely beach landscapes of the Western Isles. Alongside Scottish paintings Kelsey also produces wonderful landscape paintings of Italy, Suffolk, Cornwall and Spain as well as richly coloured still life paintings. The intensity of colour in these continental works and still lifes complement the more subtle tones of the Scottish beaches.

Robert Kesley has painted beaches and seascapes for more than 30 years. Gradually his paintings featured more welcoming, warm and sunny beaches, which he often paints in tropical and Mediterranean locations. 'It's that sort of atmosphere that I am after, preferably with crystal clear turquoise water and stretches of soft sand. I like quiet, remote places, such as in the Hebrides and along the west coast of Scotland.