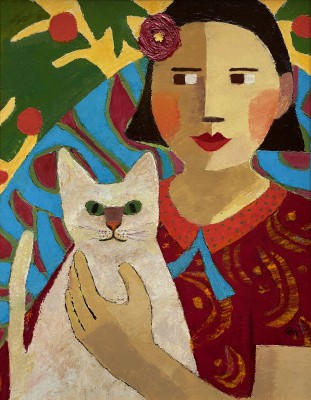 Catriona Millar was born in Milngavie, Glasgow in 1956. She studied at Grays School of Art, Aberdeen graduating in 2005.

In a very short timescale Catriona Millar has established herself as one of Scotland's most collectable artists. She produces bold, colourful art works. Often these are inspired by her own life experience combined with creative flair. The results are unique and highly recognisable figurative paintings which captivate and delight the many art collectors of her work.

Catriona Millar paints in the rural isolation of the Scottish countryside. Surrounding her are portraits of relatives, teachers and neighbours - who are often the inspiration of her paintings. Catriona Millar does not use a paintbrush. She prefers to use a palette knife, which enables her to apply paint thickly, producing the textured effect that has become her trademark. Viewing Catriona Millar's paintings it is tempting to reach out and touch the canvas and the tactile looking surface. This painting technique and the subtle nuances of narrative that she achieves using this method is what sets Catriona's figurative work apart.

The subject of Catriona Milllar's paintings is almost exclusively people. Her fascination with faces and the sensuality of flesh dictate her muse, while her intensely layered application creates a story that unfolds with each stroke. It is perhaps this strong connection with her subject matter that art collectors have been drawn to providing Catriona with incredible and unexpected sucess.

Talking about her sucess Catriona Millar says: " Had I gone to art school in my 20s I might not have enjoyed the same success. I won a scholarship in the early 1970s in Harrogate but then moved back to Aberdeen so I didn't complete it ". She continued to paint but, with two children to raise, family responsibilities took priority and art had to take a back seat. It wasn't until the late 1990s when, dropping her now grown-up son off at Gray's School of Art where he was a life model, that Catriona became intrigued by the art studio where first-year students were busily working away. That glimpse of budding young artists learning their craft spurred Catriona to apply, and by the time she was hanging her degree show in 2005 word had spread about her paintings - and even the lecturers were queuing up to buy her work.

Today Catriona Millar is recognised as one of Scotland's foremost figurative painters. She is listed in the 2012 edition of Who's Who in Scotland. The Sunday Herald Newspaper has ranked her in the top five most collectable Scottish artists and her work is collected throughout Europe, the Far East and America. She has won the respect and acclaim of collectors, critics and leading galleries while her stunning works continue to enjoy a special place amongst the contemporary art buying public.