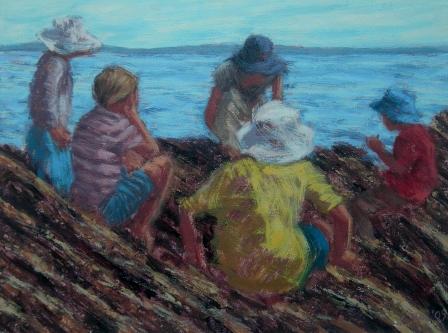 Damian Callan was born in London in 1960 and initially trained as a scientist. In 1995 he achieved a BA Honours degree in Drawing and Painting from Edinburgh College of Art. He later returned to Edinburgh as a part-time tutor, which led to doing part-time tutoring at Leith School of Art and The National Galleries of Scotland.

During his career as an artist Damian Callan has won scholarships to Prague, Toulouse and Tuscany and was artist-in-residence at Liberton Hospital, Edinburgh. Currently Damian Callan teaches art classes in his studio one day a week and spends the rest of the week on his own art work.

Damian Callan is particularly interested in the moving figure, athletes, swimmers and gymnasts. He often uses his children as models for his paintings. His loose style and the free brushstrokes of his drawings and finished oils capture the life and exuberance of children on holiday.

Each painting at Red Rag is sourced from the Damian Callan artist studio and like all Red Rag Scottish art and Modern art it can be shipped worldwide.