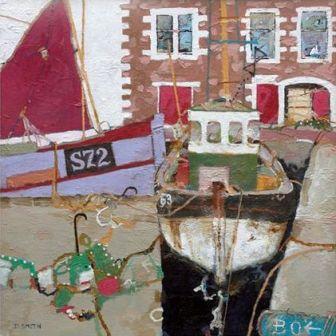 David Smith was born in Dunbartonshire in 1957. He was educated at various colleges in Glasgow including Glasgow School of Art and the Glasgow Print Studio.

David Smith is constantly inspired by the Scottish coastal scenes and the fishing villages of the East Coast of Scotland. Other subjects which regularly feature in his art works are the Scottish islands and mountains.

The palette and inspiration of David Smith's contemporary paintings are taken from the Scottish Western seaboard and the landscapes of Scotland. This combined with David's love of climbing and hill-walking is reflected in his paintings. His distinctive art style generates a feeling of a particular time and place and the associated atmosphere at the time

With his love of the outdoors and having an interest in boats and the Scottish landscape, David Smith spends much of his time painting in the Scottish Highlands and in coastal settings. Although imagination, memory and sketches are important, he feels there is no substitute for working on location.

Although most of David's work is completed outdoors because of the uncertainty of the Scottish weather, it's often necessary to retreat to the safe haven of his studio. Referring to notes and watercolour or pencil sketches he can add detail to the painting. If necessary, varnishing and some final touches can be done many weeks later. Light is very important and David is fortunate to have a studio facing in a south easterly direction.

David Smith has been the recipient of a number of art awards including the prestigious David Cargill prize at the 2001 RGI art exhibition. He is also a member and past President of the Glasgow Group of Artists and in November 2011 was accepted into the RSW. In 2014 he won the By Distinction Art Award, PAI Annual Exhibition and in 2015 The Rendezvous Gallery Artist in Residence Award, RSW Annual Exhibition