Love in the Garden 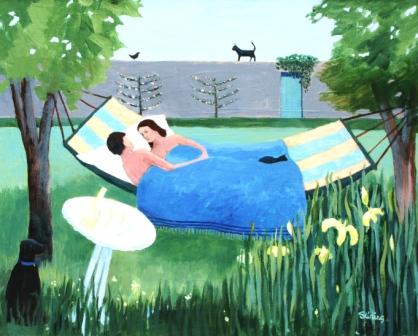 Dorothy Stirling was born in Glasgow. She studied Fine Art at Glasgow School of Art (1983'87) and now lives and works in the North of Scotland.

The art work of Dorothy Stirling is firmly rooted in her love of the Scottish landscape. Dorothy's paintings often feature the western shores of Scotland; the lochs and mountains, the fishing boats and northern skies. She combines these elements with her own fantasies and subtle wit.

Dorothy Stirling feels the presence of the human figure in her paintings can reduce the atmosphere of loneliness, and often prefers the company of a solitary animal or bird. More recently she has produced marine paintings which have been inspired by Ellen McArthur's single handed sail around the world.

Dorothy Stirling has received numerous art awards and commissions including the Nancy Graham Memorial Award, S.A.A.C. and the Maude Gemmell Hutchinson Award, R.S.A. Dorothy's art work is also featured in several private and public art collections throughout the U.K. including the BBC Glasgow, the National Housing Trust, London and the Stirlingshire Educational Trust.

In addition to Red Rag Modern Art Gallery Dorothy Stirling has exhibited at other leading Scottish Art Galleries. Each painting at Red Rag is sourced from the Dorothy Stirling artist studio and like all Red Rag British art and Contemporary art it can be shipped worldwide