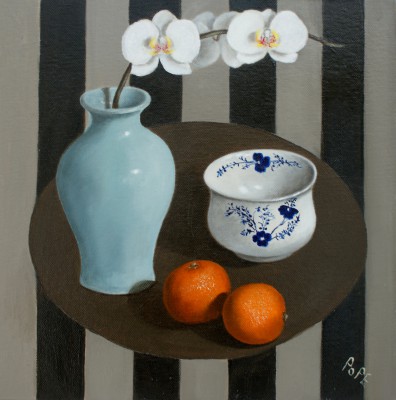 Born in 1956 in Dundee, Gail Pope had developed a natural inclination towards art from a young age. Excelling in the subject in her school years, she was awarded numerous prestigious art prizes. Despite this affinity, Pope frustrated art tutors by not pursuing a career in art. For significant family related reasons, Gail Pope went into banking.

The following marriage and family commitments saw Pope move many times around Scotland, and she spent several years in Glasgow. This period of time saw her passion for art re-surface, and she began attending evening classes at The Glasgow School of Art.

Gail Pope moved houses several times more prior to settling into East Lothian in 1993. But it was the year 2008 that saw her return full to the art community, and she began completing a flow of commissions. These were an eclectic mix of landscapes and still lifes. The past few years have seen Gail exhibit regularly in galleries primarily based in the East of Scotland, and she has scaled back from business commitments to paint full time.

Largely self-taught, Gail Pope has also been trained by the renowned Scottish painter and art lecturer George Birrell. He took her under his wing during the most embryonic stages of her work, and Gail also received guidance from painter Ann Oram. Gail's work moved from the traditional painting style to more abstract compositions, where bold colours and surreal perspectives successfully compliment proportionate compositions. Her floral and object studies are some of the most distinctive in her work, and Gail is highly selective in terms of her choice of gallery space.

Oil is her medium of choice, and Gail Pope sources inspiration from the stylised still lifes of Scottish contemporary painter Jack Morrocco. Her work can now be found in many prestigious private collections both in the UK and abroad.