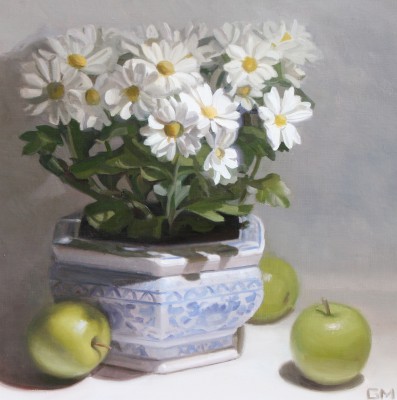 Gary Morrow was born in Glasgow in 1974. He began his career as an artist in 2008 when he left a successful career in multimedia design and development to pursue a lifelong passion for painting.

Gary's interest in traditional painting methods has led him to an extensive study of the work of past masters - from the layered approach of Italian masters such as Caravaggio and Titian to the more direct work of late 19th and early 20th century artists. Morrow is particularly inspired by the naturalistic work of the Glasgow Boys especially that of George Henry and William Guthrie and artists such as John Singer Sargent. His aim is to create art works that reflects the beauty of our surroundings in a way that is both representational and expressive.

Gary Morrow prefers painting naturalistic subjects from flowers in a still life to people in the environment. Careful observation and draughtsmanship form the foundations of his paintings. His aim is to capture the essence of his subjects as revealed in the subtleties of light, shade and colour but without a slavish attention to detail. Although still in the early stages of his career, Gary's work is gaining recognition and has been used in advertising for television and print. He currently exhibits in galleries throughout the UK and at the historic Glasgow Art Club where he is an Artist Member.