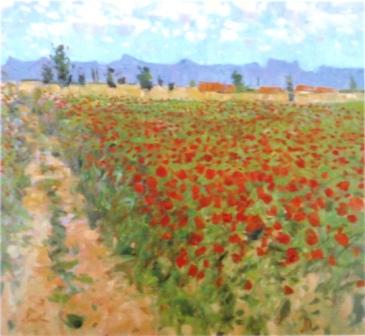 George Devlin was born in 1937 and studied at the Glasgow School of Art (GSA) from 1955 to 1960. At the GSA, Devlin was awarded The Robert Hart Post Diploma Bursary and The Haldane Scholarship. He also won the Chalmers Art Prize, The Carnegie Traveling Art Scholarship and The Maclaine Watters Medal (RSA).

After leaving Art School, George Devlin studied and painted in Greece and Italy before crossing the Sahara where he established himself in West Africa. On returning to the UK, George Devlin was invited to teach painting at the GSA school where he taught art between 1962 and 1966.

Devlin was elected a member of The Royal Scottish Society of Painters in Watercolour (RSW) in 1964. In 1968 Devlin was awarded a major Arts Council Award and established his own painting school, initially in Scotland but later relocated to France.

Between 1969 and 2004 George Devlin has exhibited at no less than 28 selected solo shows of contemporary art in the UK and overseas and many selected Group art shows.

George Devlin has a significant reputation for his Marine and Landscape paintings. But he is also a distinguished portrait painter and was commissioned in 2000 by the National Portrait Gallery, Edinburgh to paint Professor Sir James Black, Nobel Prize winner.

George Devlin is the recipient of numerous art awards. The most recent artist award was in November 2004 when Devlin won the Gold Medal of The Royal Society of Oil Painters.