I Got You, Babe 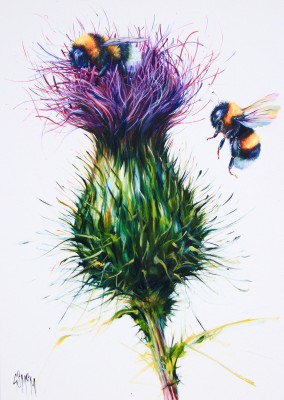 Georgina McMaster was born in 1980 and trained at Edinburgh College of Art (ECA) from 1998 to 2002. One of the biggest influences was her Grandmother Souchonne who was herself a figurative painter. Georgina's Grandmother encouraged by her to paint and drawing from a young age and she was also given a great deal of encouragement by her parents. Another contributor in her art development was her art teacher at St Columba's, Kilmacolm, Maria Robertson. It was Robertson who really taught Georgina how to paint and mix colours and she gave her the time in one-to-one tuition and encouraged Georgina to use her talents to go on to art school.

Georgina McMaster art work explores aspects of our natural environment and specifically the animals around us. In using a largely blank background in her paintings, she makes the animal the prominent significant subject and she uses careful compositional techniques to give and bring out the animal's personality and character.

When Georgina McMaster talks about animals, she immediately smiles and becomes animated and has a certain 'sparkle' in her eye. She describes them as 'beautiful' and 'I love them and there is no doubt she really means it. Her interest in animals goes back to childhood where she was 'brought up with four cats, a dog and three horses and they were my friends and a big part of my life'. This closeness to her pets is probably is at the core of Georgina's interest in painting animals or wildlife.

Georgina McMaster's initial interest in painting animals was linear. She was drawn to their sense of movement, but this has moved to an interest in texture, the face and character and a representation of the 'soul' of the animal. Using art techniques inspired by fellow Scottish artist Jenny Saville, Georgina loves to combine detail in 'the eyes' with loose brushwork and layering in the representation of the fur or feathers, an effect that she can only achieve with the use of acrylics as a medium.

Speaking about her work Georgina says: 'I love to capture the texture of the animal and I want it to look like you can touch it and engage with it. I want it to come alive and be a part of your daily living space. People should be aware of animals and be aware of the importance of nature'. Georgina started painting with everyday animals, like cows, hens, birds and horses and she has progressively expanded her interest to the 'more exclusive' animals, like eagles and deer and threatened species like tigers, the animals that people don't always get to see or get up close to.

Georgina McMaster was awarded the First Time Exhibitor prize in 2007 at the Royal College of Physicians and Surgeons of Glasgow and the David Cargill Award in 2008 by the prestigious Royal Glasgow Institute of the Fine Arts. Also in 2008, she was elected as an Artist Member of the Glasgow Art Club. Her paintings and limited edition prints are now widely exhibited throughout the UK.