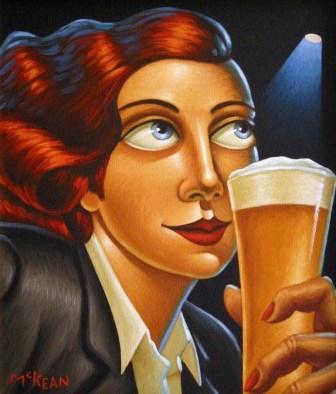 Graham McKean was born in 1962 in Irvine, Ayrshire. His paintings have been described by the art critic W. Gordon Smith as a cross between the painters John Byrne and Stanley Spencer, with an interesting 'bite'. Success for McKean is being able to produce a painting which can communicate intimately with the viewer. In this way, his bold figurative paintings never fail to attract attention.

Graham McKean says: '¯The more I observe and experience life in today's world, the stronger my desire becomes to produce paintings that are emotive, containing humour, sentiment and love. As I see my children growing, I am further convinced of the importance for me to create images of humanity and morality. This new body of paintings represents themes in life such as work, play, romance and hope. If I can communicate these on an intimate level with the viewer and maybe leave a smile on their faces, I will have achieved my ambition.'¯

The human figure is the main inspiration for Graham's paintings. He believes in artistic independence and originality while maintaining a strong attachment to the craft of painting. His subject matter is a mixture of natural observation and experience - he merges imagination with reality.

To Graham the figure is usually the main aspect in any one painting, surrounded by their own particular narrative. He rarely uses models because he feels the 'goal' of creating a painting goes beyond the physical image of a model and is strongly influenced by thought and imagination. McKean is constantly exploring what can be achieved. His paintings have been described as humorous, but he treats every painting with the utmost seriousness and sincerity.

McKean says: 'My method of working is firstly to produce a small drawing of an initial idea and then to 'grid' the image. This enables me to 'scale up' to the chosen canvas size, therefore keeping the final oil painting as close as possible to the original idea. This method was also used by the late Sir Stanley Spencer whom I much admire. Other artists that inspire me are too numerous to mention, but I am always drawn to painters who leave me 'uplifted' and hopeful and would be happy if these attributes were given to my work.'¯

Graham McKean admires many of the surrealist painters who opened the door to paintings of mortality and morality. For him, the powerhouse of his creativity is fuelled by his fertile imagination, which often borders on the surreal.

Graham McKean has exhibited widely across the U.K. with great success his paintings can be found in numerous private and public collections. He was recently commissioned by the Scottish Opera to produce five large oil paintings for the Theatre Royal in Glasgow.