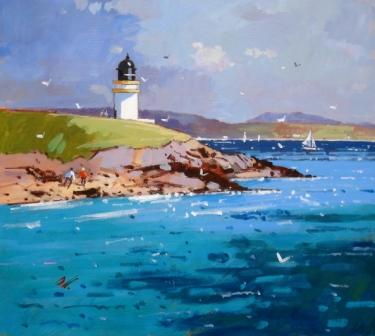 James Orr was born in Glasgow. He studied part-time at Glasgow School of Art under tutors John Boyd RGI and William Crosbie. However, his initial career was spent in business and it was not until 1985 that he began to paint full time.

Since then James Orr has developed a very distinctive style. He paints in acrylics creating landscapes often with vibrant colours. His paintings are always bold and full of light and colour. James Orr is particularly attracted to the changing light found around coastlines and seascapes. Much of his art work is inspired by the variety of colour found especially along the Scottish coastline.

James Orr paintings are joyful and uplifting. His work is a celebration of the simple pleasures in life. His use of colour and bright scenes are full of activity and his style reflects the golden period of Scottish art, so it is unsurprising that he has been influenced by the Scottish Colourists Peploe and Cadell and the 'Glasgow Boys'. Another influence on Orr's art work has been the paintings by English artist Edward Seago.

In addition to Red Rag Art Gallery James Orr modern art work has been exhibited at other leading Scottish Art Galleries including: the Royal Scottish Academy, the Royal Glasgow Institute, The Royal Scottish Society of Painters in Watercolours and the Paisley Art Institute. He art work has also been exhibited internationally in New York, Hong Kong and Brussels. His paintings are held in the collections of HRH Duke of Edinburgh, Lord and Lady MacFarlane, Touche Ross Ltd along with Kyle and Carrick Council. He received the Royal College of Physicians Award at the RGI in 1997.

Each painting at Red Rag is sourced from the James Orr artist studio and like all Red Rag Modern art and Contemporary art it can be shipped worldwide.