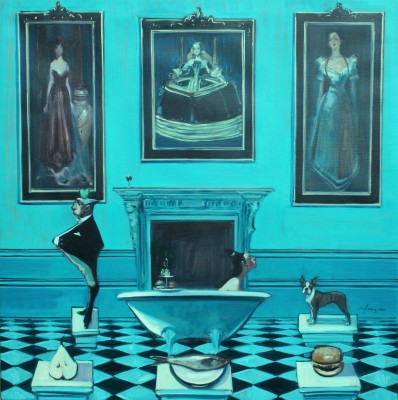 Joe Hargan was born in Glasgow, 1952. He studied drawing and painting at the Glasgow School of Art from 1970-74 under Danny Ferguson, James Robertson and David Donaldson.

He is a founder member of Group 81 Artists who regularly exhibited at McLellan Galleries, Glasgow. In 1981 Joe was elected a member of the Glasgow Art Club. Then in 1985 he became a member of the Paisley Art Institute and later that year elected a council member. In 1989 he was nominated and voted Chairman and President of the prestigious Art Institute. Hargan held the post for 11 years.

In 1996 for the quality of his paintings and his service to Scottish art Joe Hargan was awarded the Paisley Art Institute diploma. The Art Institute was founded in 1876 and has built up a substantial art collection of Scottish Art. It promotes contemporary art through its annual exhibition and also organises the notable Scottish Drawing Competition every two years.

The body of Joe Hargan paintings are remarkable for their diversity. But his paintings are immediately recognisable and follow the rich tradition of vibrant, bold colourist Scottish paintings. Contemporary paintings of the renowned character 'Sniffy' have featured in many of Hargan's paintings and are now collected by art lovers worldwide. Over the years Joe has been awarded a number of art prizes reflecting and rewarding the quality and breadth of his talent.

This is where you can see all of the Scottish surreal artists and paintings.