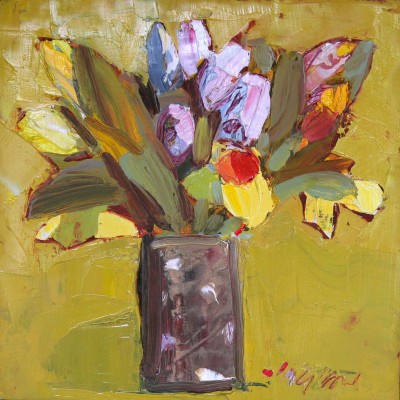 Mhairi McGregor was born in 1971. She studied at the Glasgow School of Art from 1989 - 1993, gaining a BA (Hons) in Fine Art. At Art School Mhairi received a number of art awards including a Christie's Bursary for 3rd-Year Studies, Glasgow School of Art Landscape Drawing Prize and a John Kinross Scholarship - 3 months working in Florence, Italy.

Mhairi McGregor has continued to receive a number of art awards. In 1997 she was short-listed as one of four for the Alastair Salvesen Scholarship and she was also awarded the Under 25 Regional Winner of the Laing Art Competition. In 1998 she was short-listed for the Gilchrist-Fisher Memorial Award. In 1999 she was elected Member of the Royal Scottish Society of Painters in Watercolour. In 2000 she was awarded Glasgow Art Club Fellowship. In 2001 she was awarded the Alexander Graham Munro Travel Award and the Paisley Art Institute Prize.

Mhairi McGregor has travelled extensively and painted in Europe, Australia, New Mexico, and Canada as well as finding constant inspiration in her native Scotland. She works mainly in oils, though watercolour is an important part of her preliminary work. She has the ability to capture the striking light and colours in her subjects and through her use of colour she reflects the founding principals of the RSW which is to 'encourage the bold, free and colourful qualities of Scottish Painting'.McGregor's distinctive paintings combine a wonderful eye for colour with the depth and power she generates from her strong, block like application of paint.

Today Mhairi has established a reputation as a succesful Scottish arist. She is particular known for her still life paintings. Each composition is given an immense tangibility by her strong, blocky application of paint, often reminding the viewer of the vibrant yet simple style of Cezanne's still life work. Mhairi's emotional response to subjects comes through in her paintings. Initial sketches are developed into more abstract works and her landscapes evoke a sense of place effected by a rich, fluid impasto paint surface.

Speaking about her paintings Mhairi McGregor says: 'I'm always trying to get the most out of the few colours I use and get them to play off against each other. I've moved away from brushwork too. I like to layer up the paint; slab it on until two strong colours are shining through... The main direction of my work is to sketch from life and develop those initial paintings into more abstract works. I never want to lose sight completely of what it was that inspired me to paint a particular scene. My main aim is to focus in on that first response to a landscape and to continue and expand that idea into a more concise conclusion.'

For more information or to buy original Scottish art work from Mhairi McGregor :