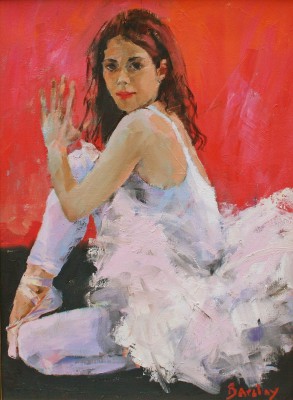 Muriel Barclay was born in Glasgow. She studied History and Philosophy at Edinburgh University before leaving Scotland for London, where she worked at a Mayfair art gallery.

After returning to Scotland Muriel decided to start teacher training. However, the motivation to paint was never far away and teaching hours gave her the flexibility to juggle her family life, leaving her some space to take regular art classes. Later Barclay moved to part-time teaching to give herself even more time to paint and also studied for an Open University Degree in Art History, which she said was "life changing."

Murial Barclay studied the development of art from the mid 1800s to the 1980s. This was a period when art was to take a massive turn with the advent of Abstract Expressionism and Pop Art. The studies had a profound effect on the development of Muriel as an artist.She says: "I started to understand what, how and why paint works. It made me reflect on what I wanted to paint and my own techniques."

Muriel Barclay has been influenced by many of the great artists. In particular she appreciates the paintings of Edward Manet , Degas, Matisse as well as Malevich, Mondrian, Rothko and Jackson Pollock. Muriel also has a love of photography, including Testino, Lee Miller and Diane Arbus and is enthralled by their powers of observation.

Talking about her paintings Muriel Barclay says: "I am interested by people and their relationship with each other and the world." She is especially interested in the female form, their intimacy, vulnerability, fragility and their defenses. Muriel's paintings are about observation and ambiguity and she encourages the viewer to interpret what the painting is trying to say.

Muriel Barclay's subjects are often beautiful, immaculately groomed girls with their hair tied back and meticulous face make-up. Frequently they are positioned in a musical or ballet theme with props which can include musical instruments, animals and males to enhance her narrative.

Today Muriel Barclay is a hugely popular Scottish with an enthusiastic number of appreciative art collectors across the world.