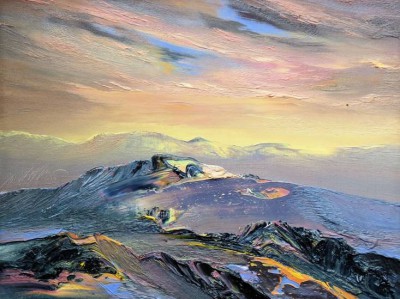 Peter Goodfellow was born in Middlesbrough in 1950. He completed a foundation course at Middlesbrough College of Art and then studied illustration at the Central School of Art and Design, London.

Peter Goodfellow early career was as a freelance illustrator. He produced art work for many book jacket, advertising and packaging design projects established himself as one of Europe's leading illustrators.

Talking about his art work Peter says: 'Perhaps it is because of my earlier incarnation as an illustrator, where I was constantly asked to fulfil tight briefs usually employing photo realistic techniques my painting which has evolved over the last 17 years has taken the opposite direction.I want the paint surface to have a life of its own.I want it to be alive. To this end I initially apply large brush strokes in an almost random abstract manner taking the paint off over and over again and then reapplying it until I am happy with the mark and I begin to see the beginnings of a place I know.The subsequent brush and palette knife marks will then take me to this place -I have been there. I remember it, the emotion, the weather, the underlying geology, the power of the land.'