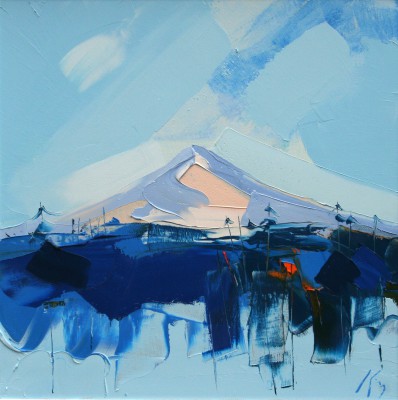 Peter King was born in Glasgow in 1953. He studied art, specialising in drawing and painting, at the Glasgow Art School under the tutelage of David Donaldson RSA and Duncan Shanks RSA. He taught Art and Design in Scottish schools for over 30 years and was Principal Teacher in Lanarkshire for over 20 years. In 2010 he retired from teaching to focus on painting professionally.

Peter King exhibits regularly at the Royal Scottish Academy and The Royal Glasgow Institute, and his work is represented in collections across the UK, Europe , North America and Japan. More recently, Peter has enjoyed success at International Art Fairs in Hong Kong, Singapore and London.

The April edition of the Sunday Times magazine, 2000, featured his painting in an article on contemporary British Landscape Painting, and, in 2010, Peter King was awarded the coveted ‘House for an Art Lover’ Award by the RGI.

The light, colour and weathered landscape of Kintyre, The Clyde Valley and the vast panorama of land and sky dominated by Tinto Hill and the Scottish Borders are a constant source of ideas and inspiration. Peter has developed his paintings from a range of motifs, which he constantly returns to and reinterprets, focusing on aspects of the changing moods of light, weather and seasons. Recently, Peter King has set up his home and studio with his family on the Island of Arran, which, for many years, has also been a source of inspiration. One of the most striking features of the West Coast of Arran is the magnificent panorama of winter skies over the Kilbrannan Sound.

The seasonal effects of nature on the surrounding environment, colour and the tactile qualities of paint are essential to Peter King’s contemporary painting style; the marks, free paint and the textured shapes become field, wood and sky. His subjects are depicted in rich, buttery swathes of oil, when, opting to mix lush colour, he wields the palette knife with a seemingly effortless effect; economy of mark-making is vital to his painting style.