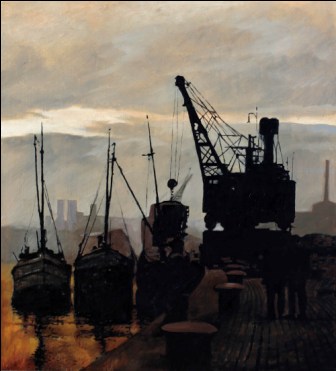 Ryan Mutter has built up a formidable reputation as a powerful contemporary painter of Industrial scenes. His bold realism combined with sometimes expressionistic brushwork, transports you into a world of arresting detail and mechanised splendour.

Born in 1978, he studied at the Glasgow School of Art, where he graduated in 2001. Like many great artists he began by teaching, but quickly found the demand for his work had grown to such an extent that he decided to paint full time in 2005. He has now won several distinguished awards, including three consecutive years at the RGI Royal Glasgow Institute, and his work can be found in collections around the world, including Geneva, Zurich, Vancouver, Belgium, Tasmania, Boston, and Utrecht.

His inspiration comes from Britain's industrial heritage, and Glasgow's predominant role as the ship building capital of the world. His dark depictions of the docks capture the sheer size of the industry in its heyday. At the time of the First World War shipbuilding provided work for 70,000 men in more than 50 yards spread along 11 miles of quayside. But today the Clyde sits empty, a shadow of its former self, with executive flats and empty waste ground dominating the landscape. The Advances in technology and design methods superseded the old, making once important skills and craftsmanship redundant. This is what drives Ryan as he looks to capture and remind people of how important this work force was in the development of the modern world.