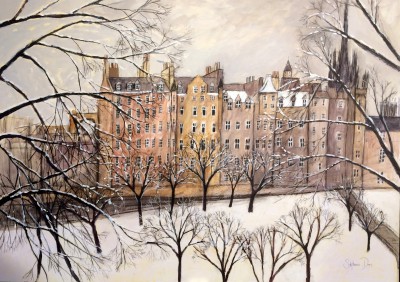 Stephanie Dees was born in Northumberland in 1974. Her formal art training took place at Edinburgh College of Art between 1992 and 1998 where Stephanie obtained BA (Hons) in Drawing and Painting and MFA in Painting.

Stephanie paints using several media. This includes: mixed media, acrylic, watercolour, pencil, oil bar and oil pastel. Her paintings are based on the architecture and landscape of a variety of places including Edinburgh, Italy, Cornwall and the Highlands and Islands of Scotland.

Stephanie's paintings evoke atmosphere and fond memories. She enjoys portraying the numerous affects light and different seasons have on the landscape both urban and rural. Her paintings of Edinburgh, Devon and Cornish vistas are the result of keen observation and skillful draftsmanship . Capturing the pale light and uncluttered charm of her subject Stephanie's paintings communicate a subtle quietness. Although people are not featured in her paintings there is a sense that they are never far away.

In 2002 Stephanie Dees won the 'Alexander Graham Munro Travel Award RSW', which is presented annually by the Society for the best painting by an artist under 30 years of age. She has won many other art prizes, including the Andrew Grant Bequest Prize for Drawing ECA in 1997, and the Scottish Education Trust Award in 1998.

In addition to Red Rag art gallery Stephanie Dees art work has been exhibited at other leading British Art Galleries. Each painting at Red Rag is sourced from the Stephanie Dees artist studio and like all Red Rag Scottish contemporary art work can be shipped worldwide.