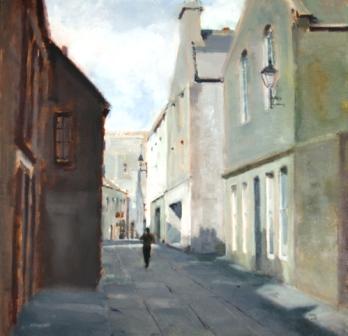 Stuart Sim was born in Orkney in 1955. He undertook art training at Duncan of Jordanstone College of Art in Dundee and was awarded the Duncan of Drumfork Travelling Art Scholarship, the John Milne Purvis Award for Painting, and a highly commended notation at postgraduate level. Art tutors Alberto Morrocco and David Mclure, first inspired the vibrant colour and sensuous application of paint which is still evident in Stuart's art work today.

After receiving the Elizabeth Greenshields Art Award in 1979 there followed a year in Paris at the Sir Stanley William Haytrer Attelier, where Stuart Sim was introduced to the colour etching process-producing work, which formed part of a traveling group art exhibition. From 1983 to 1994 Stuart worked for the BBC in London as a Scenic Artist/Designer, and thereafter as a freelance artist for the independent film studios. He also undertook a number of private art commissions including portraits.

In 1991 Stuart Sim moved to Glasgow where he lectured at the Metropolitan College in Art and Design and Fine Art. During this time he continued to paint exhibiting his contemporary paintings regularly at the Glasgow Art Fair.

Influences on Stuart Sim and his paintings include artists: Titian, Turner, Bonnard, Kitaj, Matisse, and Hopper. Sim has won a number of art awards including Arnold Clark Award from the Paisley Institute of Art.