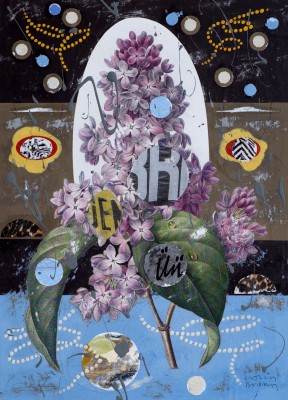 Born in Dundee, Scotland, in 1962, Colin Brown studied painting at Duncan of Jordanstone College of Art between 1982 and 1987, acquiring an honours degree and followed by a Post-Graduate Diploma, both in Fine Art. His work has received many awards over the years, most notably a major artist’s grant from the Pollock-Krasner Foundation in New York in 1996.

Colin Brown has an established and ongoing record of research and creative practice, developing a strong international career profile over the past thirty-one years. Having spent periods of time living in Europe in such places as Florence and D³sseldorf, and, alongside exhibiting in Red Rag Gallery, he regularly exhibits throughout the UK, Europe and America, his work being seen in many international collections. Colin’s home and studio are now based in Stonehaven on the north-east coast of Scotland.

Colin Brown’s creative process is one of exploration and chance; he goes into each painting with no preconceived idea - working initially on building the surface in layers and marking reference points. Gradually a dialogue between the painting and artist is developed and a definite direction is formed. Each element of the work is constantly examined, considered and reassessed. In the final analysis great importance is placed on the finished surface, balance, structure and rhythm of the painting.

Colin’s work evolves naturally year on year, sometimes revisiting old places before moving forward again. In his current paintings the imagery has become more literal, using a combination of random elements mixed with direct references to investigate allegory and narrative, memory and impurity. Although these works perhaps give more of an indication of personal intentions, they remain open to interpretation by the viewer. The paintings employ a variety of mixed media to explore human histories, random and specific mark-making, urban imagery and a mix of personal hand-writing and printed script.

Colin Brown’s working process involves a range of materials including acrylic and oil paints, collage, glazes and varnishes. The paintings are created on wood panels and utilise more urban colours than the colours of nature. Ultimately, they aim to celebrate the spirit of modern culture, the pleasure of finding and using, and the Dada-ist ideal of looking at society in fragments.

Each Colin Brown painting at Red Rag Gallery is sourced from the artist’s studio and, like all Red Rag Scottish and Contemporary art, it can be shipped worldwide.